I don't want tax cuts. My taxes pay for my government to provide social services so that I can maintain at least a minimal standard of living. I also don't want tax cuts for corporations so that they can provide their shareholders with a "good return," usually at the expense of workers who are being asked to do more and more to ensure a profit, and fired whenever executives' bottom line might suffer.

I'm still trying to find my last tax cut – the penny off the GST. All I know is that under Stephen Harper and Jim Flaherty, Canada has gone from a multi-billion dollar surplus, to this year's projected $35 billion dollar deficit. Had we not had previous tax cuts, would our economy not be in much better shape to weather the current recession?

It is anticipated that the deficit might reach $100 billion – more than wiping out our hard-fought deficit reduction strategies.

I hope the impending budget is not a plot by Harper and his ilk to gut our much-needed government services in the name of "fiscal responsibility."
Posted by Site Administrator at 12:44 PM No comments:


Barack Obama has not yet been sworn in as President, but he's taken off his jacket, rolled up his sleeves, and gotten to work. He realizes in this deepest economic meltdown since the depression that immediate and effective action is needed to stop the slide. He realizes that consumption has to be stimulated in the economy to save jobs. That means money has to get in the hands of Main Street, not Wall Street! 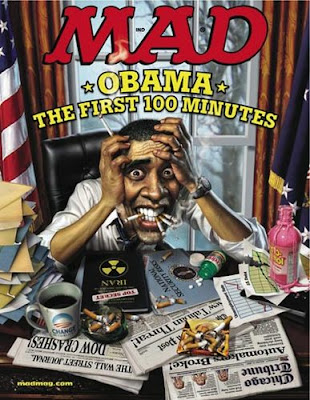 Prime Minister Stephen Harper provides a study in contrasts.
In the six weeks leading up to the election, Stephen Harper was telling Canadian people that the economy was strong, that the Canadian government would be running budget surpluses for 2009, and that he would never lead the Federal Government into deficit budgets. Amazing how his positions changed immediately following the election. He calls himself an economist! Some economist if he didn't see the economic realities media worldwide were reporting...or did he...and just didn't come clean with the Canadian public.

Harper must be more like George Dubya Bush than Obama. He is out of date in this new age of honesty and integrity in politics.

In many ways, Harper's election statements and fear-mongering would not meet the standard of truth demanded by National Advertising Standards in this country.

Harper's government has recently introduced Tax Free Savings Accounts to stimulate savings...exactly the wrong policy to introduce now. This policy tends to rob the economy of consumption dollars at a time when consumption has to be stimulated. Further, over his history as Prime Minister, he has favoured general tax cut policies which favours the rich. Only the rich can afford savings, and only the rich have enough income to generate meaningful tax savings. While the rich might profit from tens of thousands of dollars from tax cuts, most Canadians save only pennies. How much did you benefit, for example, from Harper's 2% cut in the GST? How about 20 bucks for every thousand you spent on GST taxed purchases? Would that make a difference to your expenditure? Would that stimulate your spending to get the economy back on track?

So while Obama rolled up his sleeves and got to work, what did Harper do?

Harper's frenetic action to shut down parliament in its first weeks 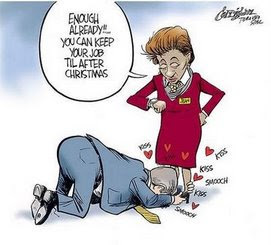 He rolled down his sleeves, put on his baby blue sweater, put on his blinders, put his head in the sand, put mufflers on his MP's and Cabinet, and shut down Parliament for two months..of course, hoping his problems would go away.

So what is leadership? You tell me!
Posted by Site Administrator at 3:02 PM No comments: